Use this brainstorming activity to kick off a Scrum project or any group-based endeavor. 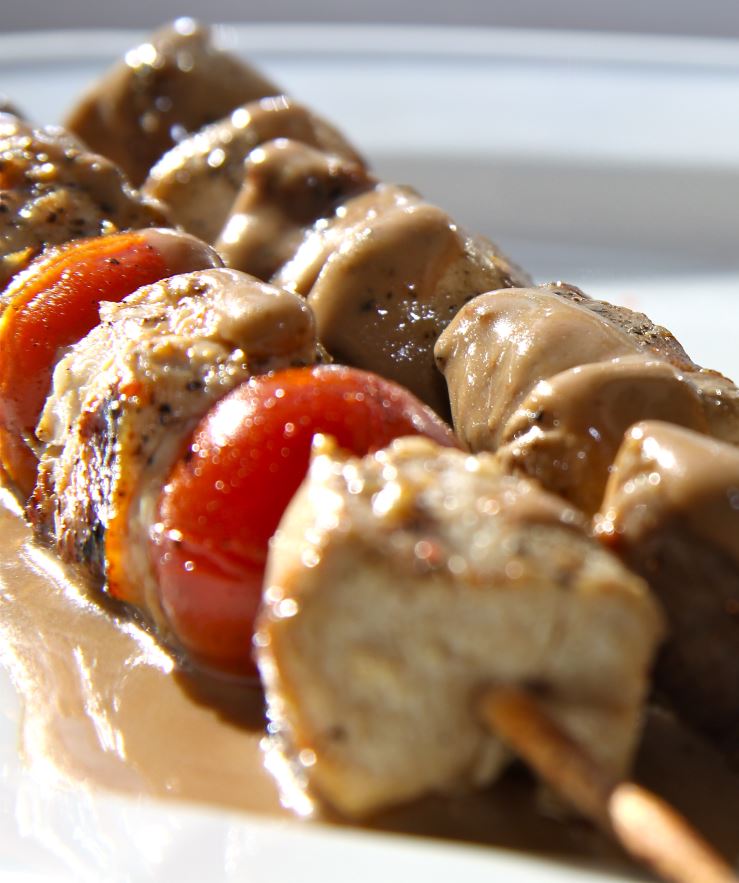 A shish kebab as an app?

This series, "Scrum Project" is a beginning-to-end description of an undergraduate-level class project designed to allow students to experience the processes involved in an agile project first hand.  In this example, the process is Scrum, the project involves student groups and is conducted primarily in-class, and the product is an app.  This activity includes a lesson in brainstorming (i.e. Osborn and basic methodologies), an introduction to the concept of elaboration (a tenant of agile), and acts as the initial idea generator for a larger Scrum project. 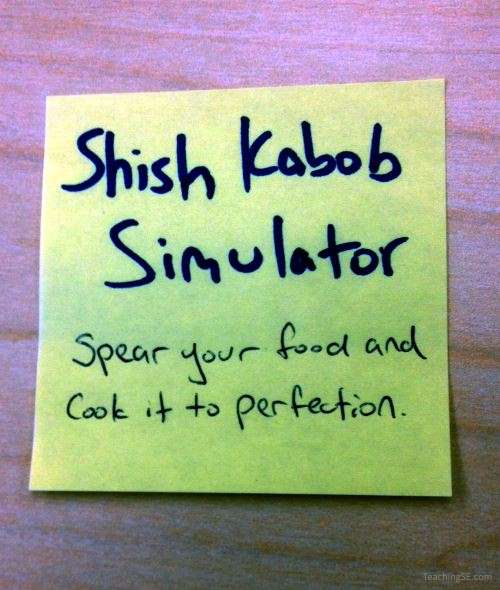 Ideas are written in quantity on post-it style notes

For this activity, you will need some post-it style notes and about 1.5 hours.  Begin by explaining brainstorming, what it is, its purpose, and some examples of guided brainstorming methods.  This can be done as a mini-lecture or as required reading before class. Once you are ready to begin the activity, pass out post-it style notes, ensuring that each student has at least a few. Ask the students to individually think of an idea for an app, giving the following qualifiers:

Ask the students to write their idea down on the note and, once complete, place the note on the desk at the front of the class. Once this is complete, place them randomly on a whiteboard at the front of the class. The anonymity desired here can also be achieved by using a mobile whiteboard and having students place them on the back and then turning the board around. 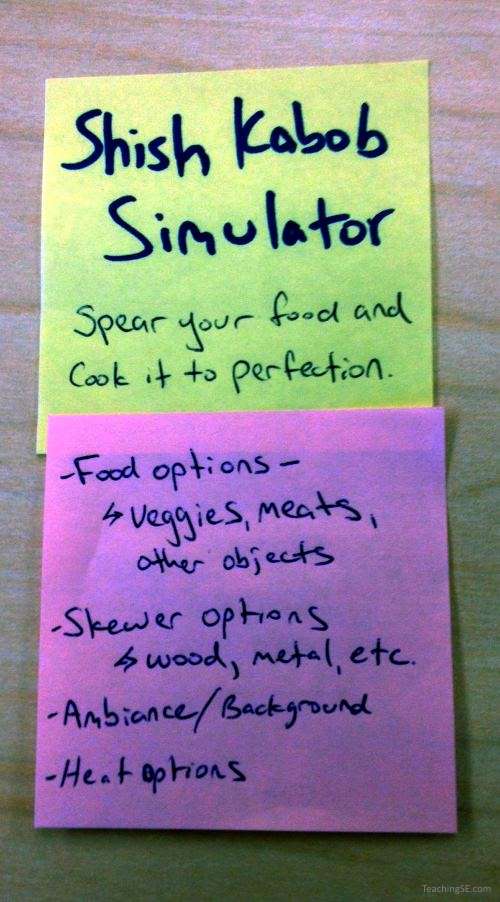 The first round of elaboration is the easiest

This can be repeated and the students can be given more than one opportunity to generate an idea.  There are a few approaches that could be taken here:

Once an appropriate number of ideas (post-its) have been generated, you may choose to narrow down the selection.  This can be done by dividing into categories, having the class vote via show of hands, or by another method of your choosing.  One additional possibility is to allow the following process of elaboration to naturally narrow down the total number of ideas.  The narrow-down target is approximately one idea per student in the class.

The next phase is elaboration, in which the brainstormed ideas are further developed by the class.  Before starting, ensure that the class has been exposed to each idea in the pared down group, keeping in mind that this may have already been achieved in the process of narrowing them down.

First, have each student choose an idea that they would like to elaborate on.  On a second post-it style note, have the students elaborate on the idea, using the following guidelines:

The second round of elaboration takes more thought, and has the option of eliminating first-round ideas

This first round is a combination of elaboration and brainstorming - relying on the creativity needed to come up with ideas, but narrowing them with a constraint.  The second round, conducted next, should more closely resemble the method elaboration employed by agile teams - a deeper more purpose-driven process.

After all ideas and associated first-round elaborations have been collected, divide the students into teams of 4-5.  Teams as small as 3 can work as well, but are not preferred, and teams of 7 or larger may not be conducive to agile in general, especially in this context.  Each team is to further elaborate on the original idea (via a new post-it), but with stricter guidelines:

This process may be repeated as many times as the instructor would like - basically until each significant idea has been elaborated upon sufficiently to give a complete understanding of what it represents and whether it is a candidate for inclusion moving forward.

The next part of this activity, covered in the next article, covers team creation and final selection of which ideas are to be included in the scrum project moving forward, as well as some early steps in kicking off the Scrum project.